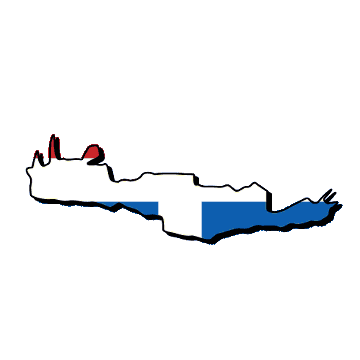 Travel by ferry to Crete! Travelling to Crete couldn't be more relaxed than by ferry. This way you start your Crete holiday rested and without stress.

There is a wide range of Fähreto Crete. No less than five shipping companies offer regular connections to the largest Greek island from 18 ports – including Piraeus, Mykonos and Naxos. The four ferry ports on Crete are Chania, Rethymnon, Sitia and the island capital Heraklion.

Use our ferry search to find your ferry to Crete. We compare the offers of different shipping companies on each route. So you always get the cheapest offer for your Creteferry. Check availability and timetables now.

All ferries to Crete

Here you find all current ferry connections to Crete.

All ferries from Crete

Here you find all current ferry connections from Crete.

All ferries within Crete

Here you can find all current ferry connections within Crete.

You can find an overview of all ferry ports in Crete here.

In Crete, the sea is turquoise blue, the sandy beaches are white, the old towns are particularly stylish, the olive oil is excellent and the cuisine is simply delicious. Combine that with 300 days of sunshine and thousands of years of culture and you have the perfect holiday destination.

Crete’s capital Heraklion is famous for the Palace of Knossos. The old town also inspires with beautiful buildings in the style of the Renaissance and a truly imposing fortress. Around the lively Venetian Square it is wonderful to stroll and shop.

The palace of Knossos looks back on 4,000 years of human history. Here was the seat of the legendary king Minos, here originated the myths about Icarus, the Minotaur and the legendary labyrinth. Especially worth seeing are the large throne room, the royal rooms and well-preserved frescoes.

Once dominated by the Venetians, the harbour town of Rethymnon today enchants its visitors with a mighty fortress, a picturesque Renaissance old town and a dreamy harbour with a lighthouse. After a lot of culture you can relax on the wide sandy beach.

A stroll through the historic port of Chania will take you back to Venetian and Ottoman times. Fondly referred to as the “Venice of the East”, it is considered by many visitors to be the most beautiful city in Greece. With its old town, harbour, Egyptian lighthouse and a mighty fortress, it has much to offer its guests.

A visit to Arkadi Monastery will take you to the most important national monument on the island. It dates back to the 14th century and played an important role in the struggle for Cretan independence. In 1866, 964 people put up a fight against a 15,000-strong Ottoman army. Without a chance they blew themselves up in the powder magazine to avoid falling into the hands of the enemy.

Medieval fortress walls and the ruins of old houses make the uninhabited island of Spinalonga a special place of interest. Venetians once lived here, later Ottomans. With the outbreak of the deadly disease leprosy, the Cretan government decided to use the island as an isolated leper colony. And so Spinalonga went down in history as the last leper colony in Europe.

In the east of Crete, on the Lassithi plain, you will find the cave of Psychro. According to legend, Zeus, the father of the gods, was born here.

Over a length of 17 kilometres, the Samaria Gorge offers hikers fascinating experiences in nature. A wooden staircase leads steeply down in serpentines, at the bottom a river, refreshing freshwater springs, the “Iron Gate”, an abandoned village and with a bit of luck Kri-Kri mountain goats await you.

To enter Crete (Greece), German citizens need an identity card or passport or a child’s passport. A visa is not necessary.

Comfortable and fast is the way to Crete by plane. Travelling by car, motorhome, bus or train overland is extremely time-consuming. From Munich to Crete it is after all almost 2,500 kilometres.