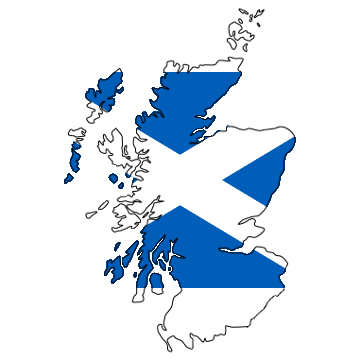 Travel by ferry to Scotland! Travelling to Scotland couldn't be more relaxed than by ferry. This way you start your Scotland holiday rested and without stress.

A direct ferry service to Scotland currently exists only from Northern Ireland on the two routes Belfast – Cairnryan and Larne – Cairnryan. A possible alternative would be the ferry connection from Amsterdam to Newcastle. From here the Scottish border is not far away.

Use our ferry search to find your ferry to Scotland. We compare the offers of different shipping companies on each route. So you always get the cheapest offer for your Scotlandferry. Check availability and timetables now.

All ferries to Scotland

Here you find all current ferry connections to Scotland.

All ferries from Scotland

Here you find all current ferry connections from Scotland.

You can find an overview of all ferry ports in Scotland here.

Rugged mountains, stately castles, mysterious ruins, mystical places and cities full of culture – Scotland offers all this to its guests. The Scottish people look proudly on their history and keep their traditions alive until today.

In Scotland’s capital Edinburgh, history is omnipresent. Edinburgh Castle towers high above the city and a stroll along the Royal Mile is like a journey into the past. From the 250-metre-high Arthur’s Seat you can enjoy a magnificent panoramic view of the entire city.

In the heart of Scotland, high on the castle hill, lies Stirling Castle. Numerous bloody battles were fought here between the English and Scots and Mary Stuart was crowned Queen of Scots at Stirling Castle in 1543.

Where William Wallace once led his troops to victory, the Wallace Monument now stands. Scotland’s national hero was betrayed and met a tragic end. The tower is 67 meters high and offers a fantastic panoramic view.

A stone bridge leads to Eilean Donan Castle. Castle and location are of unique beauty. Little wonder that it has already served as a famous film set.

On the train route from Mallaig to Fort William lies the Glenfinnan Viaduct. With a length of 380 metres and 21 piers, it is an imposing structure. Harry Potter once passed the viaduct on his way to Hogwarts. During the summer months, the route can be travelled by steam locomotive.

On the Isle of Lewis, several fascinating stone circles were formed 3,000 years ago in Callanish. Callanish I is considered the most important site, 13 boulders have survived the millennia undamaged here. A truly mystical experience.

Scotland’s most famous lake is without a doubt Loch Ness. Its deepest point is 230 meters deep. Enough space, then, for a sea monster called Nessie, which has been sighted here regularly for centuries. Those interested in castles can pay a visit to Urquhart Castle.

On the Isle of Skye, the Old Man of Storr can be seen from afar. A walk takes you to the 48 metre high rocky outcrop and promises wonderful views of the Storr Mountains and Loch Leathan.

With a height of 1,345 metres, Ben Nevis is the highest mountain in Scotland. The ascent via the Mountain Track begins at an altitude of 20 metres and leads steeply over rock steps, switchbacks and scree fields to the summit.

The Cairngorms National Park is characterised by mighty mountains, endless forests, thundering waterfalls and a rich variety of wildlife. Royal eagles, capercaillies and wildcats find a protected habitat here. Especially Loch Eilein fascinates with its location and an island with castle ruins from the 13th century.

A valid identity card or (children’s) passport is sufficient for entry into Scotland. A visa is not necessary for your holiday in Scotland.

By car, bus and train it is easy to get there via the mainland. However, you should plan enough time for this, because the journey is long. The airplane offers a time-saving alternative. There are international airports in Edinburgh, Glasgow, Aberdeen and Inverness.